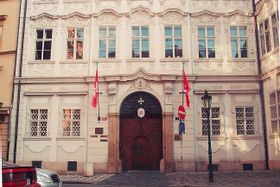 Anglo-American University (AAU) is the oldest private university in the Czech Republic. It was founded in 1990, shortly after the collapse of communism, as the Anglo-American College (AAC) by Jansen Raichl and Dr. Vlasta Raichlová. Their vision was to create an educational institution that would combine the best of American and British academic principles with Central European traditions.

AAU has consistently attracted strong credentials to its academic community. Today it prides itself with gifted undergraduate and graduate students from over 60 countries and a renowned multinational faculty trained at fine universities around the world, including Harvard, Yale, Stanford, Berkeley and others. AAU alumni have excelled in their professional careers and enjoy work worldwide in top positions in business, academia, politics, diplomacy and media. Anglo-American University is divided into five schools: School of Business Administration, School of International Relations and Diplomacy, School of Humanities and Social Sciences, School of Journalism , John H. Carey II. School of Law.